Torremolinos is out of this world!

Spring 2013: Holiday in Malaga on the Costa del Sol 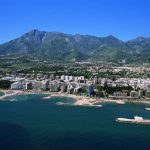