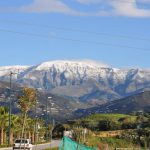 Winterholidays on the Costa del Sol

Marbella is the most valued beach destination of Spain, according to a study